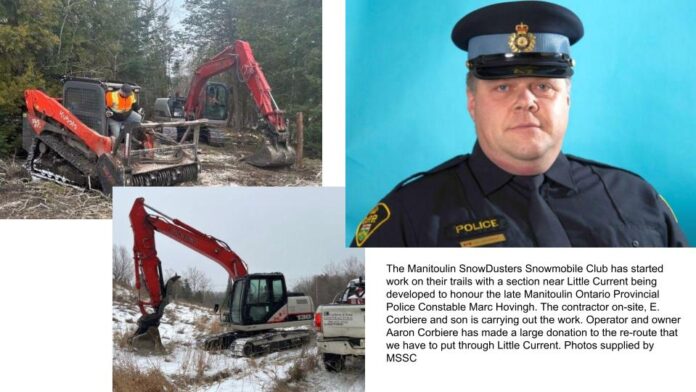 A new section of trail on Manitoulin Island is in the works by the Manitoulin SnowDusters Snowmobile Club to remember the late Manitoulin OPP Constable Marc Hovingh.

Dave Mack, the president of the club says Hovingh was killed in the line of duty in 2020 while responding to a traffic complaint in Gore Bay.

He says the club, as a gesture of remembrance, will re-route a trail near the Little Current detachment of the OPP in his honour with the support of Hovingh’s family.

Mack is also with the UCCM Anishinaabe Police Service and worked with Marc for over 17 years, so the tribute is also very personal for many Island residents.

He adds the club will host a dedication ceremony once the work is complete on the trail and it will be also officially marked on the Ontario Federation of Snowmobile Clubs’ trail guide.