It was the first time a Christmas feast was provided in Elliot Lake by a new partnership while other similar gatherings were also held in Espanola and Little Current including the delivery of meals with all the fixings in Spanish.

The inaugural Harvest Kitchen Christmas Lunch served 115 meals in Elliot Lake with an additional 35 meals delivered to local seniors in the Spanish area.

The Harvest Kitchen program, a partnership between Maplegate House for Women, the Elliot Lake Emergency Foodbank, and the Elliot Lake Royal Canadian Legion began on Halloween and will now be a regular staple in Spanish.

It will run until April operating three days a week while serving an average of 138 meals daily.

The program will resume serving lunch on January 4th.

The dinners in other communities also returned for the first time since the onset of the pandemic with dozens of individuals and families taking in the festive feasts.

All the organizers thank their many donors and sponsors who helped provide with the various initiatives. 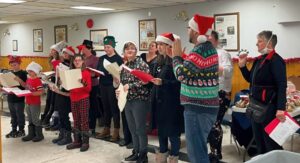