A new Little Free Library located out of the Lee Valley Community is getting plenty of use.

Nancy Horan says an old china cabinet was repurposed by her sister, Judy Moody of Espanola, with free books being made available to the public.

She says bookworms can also donate books, so the world of reading is available to anyone travelling through the area.

In fact, she adds, the first users were travellers from Vancouver heading to the East Coast.

Horan adds there is also an app available so readers can find the little library locations on their travels.

She says the library will remain open until Thanksgiving and reopen in early May.

The library is located on Lee Valley Road at the Cutler Lake/Hunt Road intersection between Espanola and Massey.
The library is in the process of being registered globally and readers will be able to find it shortly on the Little Library map App. https://littlefreelibrary.org/app/
There is also a guest book for people to sign when they visit the library with some history of how it was constructed.

You can read more about little free libraries at https://littlefreelibrary.org

Horan also shared a bit of the history behind the concept. In 2009, Todd Bol of Hudson, Wisconsin, built a model of a one-room schoolhouse. It was a tribute to his mother; she was a teacher who loved to read. He filled it with books and put it on a post in his front yard. His neighbours and friends loved it, so he built several more and gave them away. They were inspired by community gift-sharing networks, “take a book, leave a book” collections in coffee shops and public spaces, and most especially by the philanthropist Andrew Carnegie.

Around the turn of the 20th century, Carnegie set a goal to fund the creation of 2,508 free public libraries across the English-speaking world.

And there is a secret inside, two good luck book fairies, to ensure the love of reading is shared far and wide. 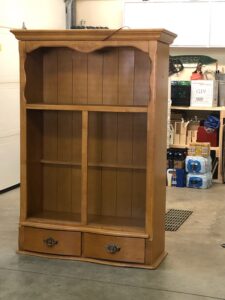 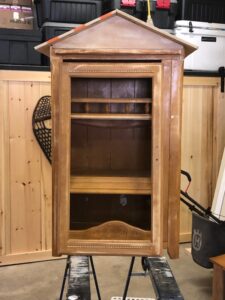 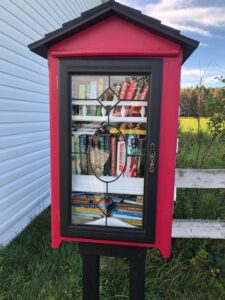 The original cabinet is repurpoosed, good luck book fairies added, some paint and good to go.