Donated benches installation begins at a park on Manitoulin Island

The Municipality of Central Manitoulin is augmenting the Al Wagg Memorial Park with the installation of several benches.

According to the release, the first of the donated benches are being constructed and installed in the park, also known as Wagg’s Woods last Thursday.

The Trail Committee is heading up the project to install up to six benches along the accessibility trail, which are made of recycled milk jugs.

Alma Waggs donated the land in the 1990s and is remembered for establishing Wagg’s Creamery in Mindemoya and serving as Reeve for over ten years.

The rest of the installation will take place soon.

Two of the benches were donated by the Island Animal Hospital with the rest donated by Madeleine Wagg Becks, Jake’s Home Centre in memory of Don and Kevin Mackan, Finns Gas Bar, and the Love Family. 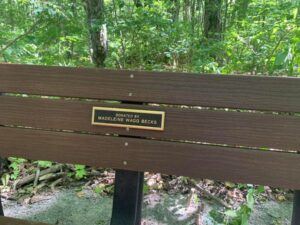 Blind River courthouse to be demolished

History Day in Kagawong features historians and the Empress of Ireland