Ontario Regional Chief Glen Hare says Archibald made “serious allegations” about the Assembly and its employees without presenting any evidence.

He says the decision to suspend Archibald was made in response to statements made by her at the Chiefs of Ontario Annual Chiefs Assembly and in public statements she released last week.

Hare says she called the national organization corrupt and called for the dissolution of assembly operations, which employees around 200 people.

Hare says their organization has the utmost trust in the national assembly and until the results of the independent investigation are in, it must be able to continue its work.

Archibald says she has not received formal notice of the suspension and she will continue to call for a forensic audit and full investigation of the Assembly. 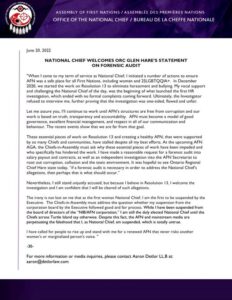