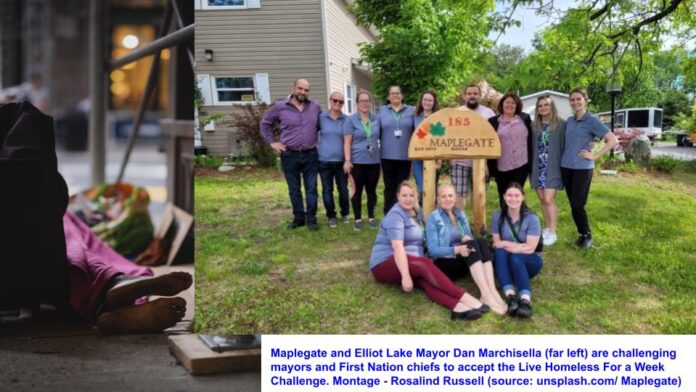 The Elliot Lake Women’s Group has challenged the mayor to live in a homeless person’s shoes for one day, but the challenge will be five days instead and has also been issued to mayors and chiefs across the North Shore corridor.

Interim Director of the women’s group, Theresa Hiuser issued the challenge in jest, but Mayor Dan Marchisella took it a step further.

Instead of one day, he plans to live homeless for a week.

She says Marchisella is looking to raise $5,000 for the group through pledges and has also issued a challenge to his counterparts throughout the North Shore.

Huiser says the mayor will work his regular hours but will live under a tarp at the former site of the Algo Mall starting on June 20th for five days.

She says staff, residents and supporters and other challengers will join him in the fundraising effort with one other mayor already saying yes.

A Go Fund Me has also been set up.

Donations can be made at: https://forms.elliotlake.ca/Donation-Form?

The public can contact the Maplegate shelter directly at 705-461-9868 for more information or to donate.

The full text of the mayor’s challenge is as follows …

I will be undertaking the challenge of living homeless from June 20th-25th at the former Algo Mall site on 151 Ontario Ave. I hope to raise around $5,000 for our local shelters, Maplegate, Larry’s Place and the women’s transitional home. I will have a lockbox to take donations along with people being able to go on the city of Elliot Lake website to donate also.

As for the challenge, I will be using only what I can physically carry, so food and drink may be scarce also. I will need to step away from my shelter to meet my work obligations but will be spending most of my time and all nights on site.

This is not a camping trip, feel what it’s like to be invisible on your streets, in your parks and in your alleyways. Feel the hunger, feel the cold and discomfort, feel what it is to be the unseen Canadian.

We can no longer ignore this growing crisis in our country, we need to do more and talk less, we need to raise awareness and put forward a helping hand.

In other nations, the Canadian flag was a symbol of peace, humanity and charity. If we as a country can afford to give billions of dollars a year in foreign aid and relief, caring for others in countries we may never see, then surely, we can do the same for our own Canadian citizens, our brothers, mothers, sons, friends.

From eight years of speaking with the homeless in many communities, I know there are many who choose to be homeless and would continue that journey by choice, but they’re so many in all communities across this nation who have no choice.

They need a helping hand up, they need the care of a neighbour, and they need a guiding light to transition their lives in a new direction. Not only do we need homes and funding for these homes and the staffing.

We also need proper programming to assist with the multitude of issues that have caused this crisis, from addictions relief, trades training, financial planning, mental health workshops and the centres that can provide these. Some just need a helping hand for a few days… I know because I’ve been there myself.

I have had the pleasure to meet with many from Queens Park and Parliament over the last eight years and know that most have big hearts and care for the people in this country, therefore I send the challenge to them, to make this the Canada that all other Nations believe we are … ”