The Ontario Provincial Police Association hosted their annual awards earlier this week with a Manitoulin Island officer receiving recognition for her work with youth.

Ford oversaw several youth-geared programs over the last year including meeting with students, hosting safety programs and representing the detachment at school gatherings including Remembrance Day.

This medal is a national award which signifies the completion of 20 years of full-time service with one or more recognized Canadian Police Services. The medal represents years of dedicated service to the public.

Police officers are eligible for a bar for each subsequent ten-year period of full-time exemplary service. The First Bar signifies 30 years of dedicated Canadian Police Service.

This pin is awarded to civilian members who have completed 20 years of service with the OPP.

This award is presented to civilian members who have completed 30 years of service with the OPP.

This award is presented to civilian members who have completed 40 years of service with the OPP.

The OPP Youth Foundation recognizes members of the OPP who have demonstrated an ongoing commitment to provide assistance and mentorship to youth.

This award recognized members who have shown themselves to be ambassadors in the areas of health, wellness, fitness and sport.

These awards are given to OPP members and citizens who have shown outstanding achievements through assisting the OPP, exemplary performance of duty, outstanding investigations, community service, or selfless actions.

Robert Mathia – Assist OPP – Found a missing female who had fallen down an embankment. He stayed with her and comforted her until other first responders could reach them by boat.

PC Riley Bell – Exemplary Performance of Duty -Assisted with the successful apprehension of a male who was evading police and causing significand damage to property and vehicles while operating a front-end loader.

PC John Hyrsky – Exemplary Performance of Duty – Assisted in the successful apprehension of a teen who had a firearm and was threatening to harm people.

The Commissioner’s Letter recognizes an employee or citizens that has gone beyond what an individual would be expected to do in a similar circumstance.

The St. John Ambulance Award recognizes individuals who have relieved pain and suffering, saved or attempted to save a human life through the application of first aid.

Was the first officer on the scene of a crash involving a truck and a motorcycle. Took charge of the scene and performed CPR on the motorcyclist until EMS arrived.

Officers and Provincial Communication Centre members worked together to locate and rescue a female in distress who had wandered out onto the ice on Bay Lake before falling unconscious.

David De Abreu – Citation for Lifesaving & St. Johns Award – Provided CPR and saved his father-in-law who had a medical emergency and collapsed.

Ruth Hill & Nathan Hill – Citation for Lifesaving – Saved a woman and her baby who were found in Lake Huron on a cold January day.

Jackson True – Citation for Lifesaving -Alerted his family to a significant fire in the family home, allowing everyone to get out of the house safely. 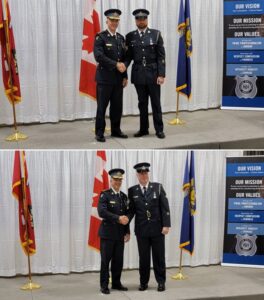 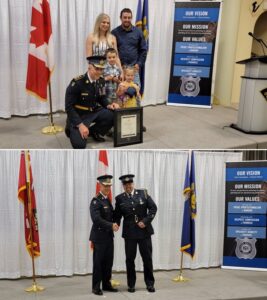