Elliot Lake Fire Chief says fires are now both out

He says his crews were out at both the site of a rowhouse fire and a bush fire checking for hot spots throughout the day yesterday.

He says two of the eight rowhouse units were directly involved in the fire with one being gutted and another beside it suffering heavy damage.

He adds because of the smoke damage, all eight units were evacuated, and the residents are receiving assistance from the local Red Cross. It is unknown when or if they will be able to return.

Thomas says although the cause is still not clear, the fire is not considered suspicious, and the insurance companies are now involved.

Anyone wanting to assist the displaced individuals can contact the Red Cross in Elliot Lake. 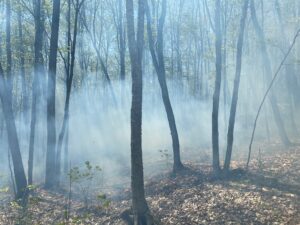 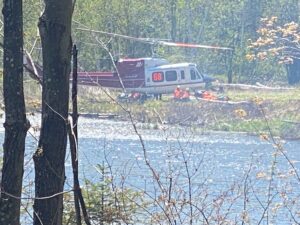 The Esten South fire filled the air with heavy smoke and the winds whipped up the flames so the Ministry of Natural Resources and Forests were called in. Photos by Elliot Lake Fire Chief John Thomas and used with permissions.