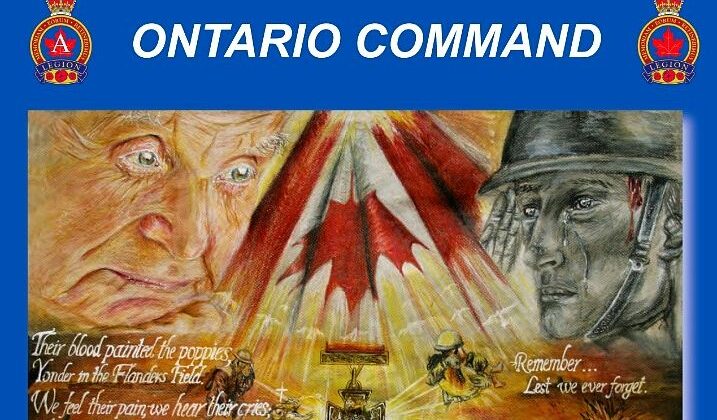 Legion provincial conference
North Bay is about to host hundreds of Legion delegates from across Ontario.
They’re coming for the 52nd Biennial Convention of the Royal Canadian Legion Ontario Provincial Command.
Spokesperson Marc Picard says a flag-raising ceremony is taking place Friday afternoon at City Hall with delegates and guests from across Canada arriving that day with the official kick-off Sunday.
Picard says upwards of 500 people are expected to be in Sunday morning’s parade, including pipe bands from North Bay, Callander and across Ontario.
He’s encouraging the public to check out the parade as it makes from Memorial Park, down Ferguson Street, to the museum.
This is the first time the convention has been held in North Bay since 1965.

Removing abortion barriers
Over $3.5 million in federal funding is going to improve Canadians’ access to vital abortion services and accurate reproductive health information.
Women and Gender Equality Minister Marci Ien says the funds are to address barriers like the lack of resources needed to travel to access abortion care, and the lack of culturally safe, stigma-free services.
Ien says over the next three years just over $2.1 million is going to Action Canada to expand its Access Line and Sexual Health Information Hub programs and just under $1.5 million will go to the National Abortion Federation Canada for financial and logistical support to women seeking abortion services and training for health care providers in providing abortion services.

Ukraine pushing back
British military intelligence officials say Ukrainian forces continue to push back Russian troops in a counter-attack near the eastern city of Kharkiv.
They say Ukrainian soldiers are now only a few kilometres from the Russian border.
Meantime, Ukraine’s chief prosecutor says the first war crimes case will see a captured 21-year-old Russian soldier tried for murder, for killing a 62-old-man riding a bicycle in a village near Kyiv.
The soldier was allegedly ordered to shoot the man to prevent him from telling Ukrainian forces that they were retreating from the area.
Ukrainian officials also say negotiations continue to exchange prisoners of war for hundreds of wounded Ukrainian soldiers from the massive steel plant in the devastated southern port city of Mariupol.

Finland wants to join NATO
Finland’s leaders have formally confirmed their desire to join NATO.
In a joint statement this morning, the country’s president and prime minister say the move is important to maintain their security and independence, since they share a 13-hundred-kilometer long border with Russia.
A vote in Parliament must still be held.
Finland and neighbouring Sweden had been neutral, but public opinion changed sharply after the Russian invasion of Ukraine began on February 24th.
Sweden is expected to make a decision in the next few days.

Conservative leadership debate
The six candidates vying to become the next leader of the federal Conservative party gathered in Edmonton last night for their first official debate.
As expected, perceived front-runner Pierre Poilievre was the main target, criticized by the other candidates for what they see as his divisive approach to government.
But he stuck to his guns, claiming his goal is to give Canadians the “freedom to take back control of their lives.”
The party plans a French-language debate on May 24th, with the possibility of a third in August.
The new leader will be chosen on September 10th.