February is Inclusive Education Month and this year, Community Living Algoma launched their “Together We’re Better” contest to hear how inclusion is happening in schools in the District of Algoma.

He says Obach, a grade seven student of Our Lady of Lourdes wrote about supports available to fellow students with intellectual disabilities.

He adds that Smith, a grade five student at Our Lad of Fatima launched a games club where students from grades three to five in an interactive and inclusive environment.

Iacoe says the two receive certificates and gift cards with an additional $100 for the games club.

Community Living Algoma provides support and services to more than 730 people in the Algoma District who have intellectual disabilities or are on the autism spectrum.

Each school also received a certificate recognizing its role in promoting and fulfilling an inclusive school environment.

“We are very pleased to collaborate with Community Living Algoma and have a Games Club offered at our school. We are very proud of Oliver who initiated this club,” says Andrew Chi, Principal at Our Lady of Fatima Catholic School. “The Games Club has been an amazing program that has allowed students to socialize, enjoy challenging board games, learn a variety of skills and have fun every Monday and Friday. We are very impressed with all the students involved and a special thanks to Kay Brennan (Community Support Worker at Community Living Algoma) for bringing this amazing club to life at Fatima.”

“It is very gratifying when students advocate the work we do in education.  It is very touching when you hear the good work being done when you hear it directly from a student’s perspective,” says Stephane Prevost, Principal at Our Lady of Lourdes French Immersion Catholic School. “Many thanks to Community Living Algoma who has opened these channels in this essay contest.  We are very proud of Nickolas for this recognition and the school supports he mentions in his article.” 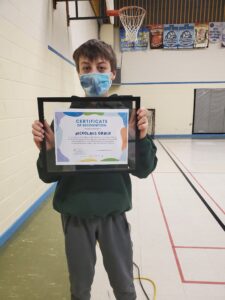 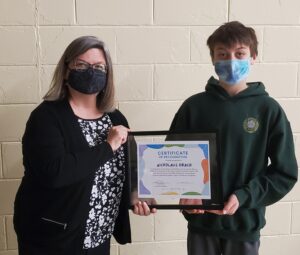 Nicholas Obach receives his certificate. Photo provided by CLA and used with permission.