Township of Sables-Spanish Rivers deputy mayor has resigned after what she says is a toxic environment that allows harassment to do go on.

Deputy Mayor Glenda Massicotte has been on council for eight years but says the work environment is one where there is a fear of repercussions from the very people who are the cause.

She says the township has policies in place that are supposed to protect the staff and council, but the continued strife has led to emotional stress for her and other people, and she is simply done with it.

She adds with the upcoming municipal election, she hopes there will be a change in leadership that is not self-serving and will better serve the township.

Massicotte says she notified the township of her decision by letter yesterday resigning as of April 1st. 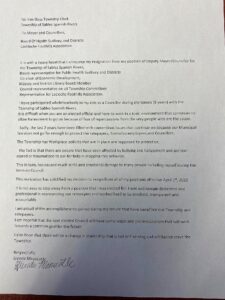