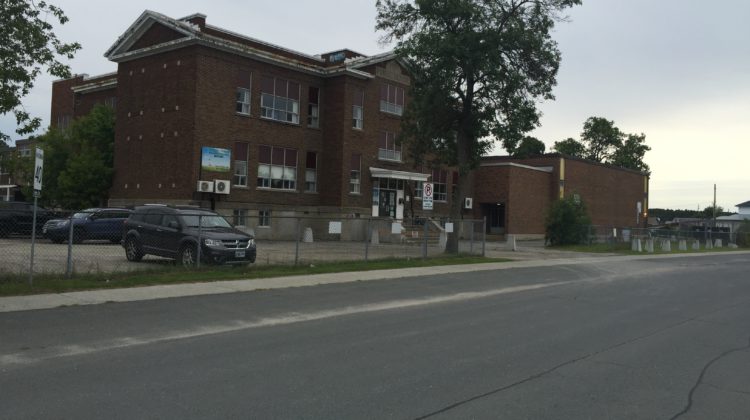 The fight continues to save an Espanola school building, that was originally built over 100 years ago. AB Ellis Public School has had many retrofits over the year and a group of volunteers that have formed a corporation are working on trying to save the building from the wrecking ball and have it converted into 44 apartments for low income families and seniors. Photo by Rosalind Russell – myespanolanow.com/myalgomamanitoulinnow.com staffer

The chair of Rainbow Community Non-Profit Housing Fred Yackman says he contacted the Rainbow District School Board recently for a letter of support for a planning grant to retrofit the building into senior and low-income apartments but was shocked to find out the board upheld its motion to demolish the building in late June.
He says private donations, including a recent one of $30,000, were being used to complete a feasibility report, architectural drawings, and input survey from the public for presentation to the board.

Board chair, Doreen Dewar says demolition was part of the request made to the Ministry back in 2014 for the new addition to the high school to house AB Ellis and, in turn, the building would be demolished to address parking issues surrounding Espanola High.

She adds the only reason the order was not carried out is the French Catholic board needed the building to house Sacred Heart students and staff while their new school was being built.

Yackman says he has contacted the Board to meet with the trustees to ask them to rescind the demolishment order for the school.
Yackman stresses the group is continuing its work including meeting the board to discuss the feasibility study, architectural drawings and results of an input survey detailing retrofitting the building into 44 one- and- two-bedroom apartments.
The group is also continuing the process to apply for a planning grant to continue the work.
The corporation is waiting to hear from the board to be on the agenda for their September meeting.