Results of the Manitoulin Phragmites Project 2020 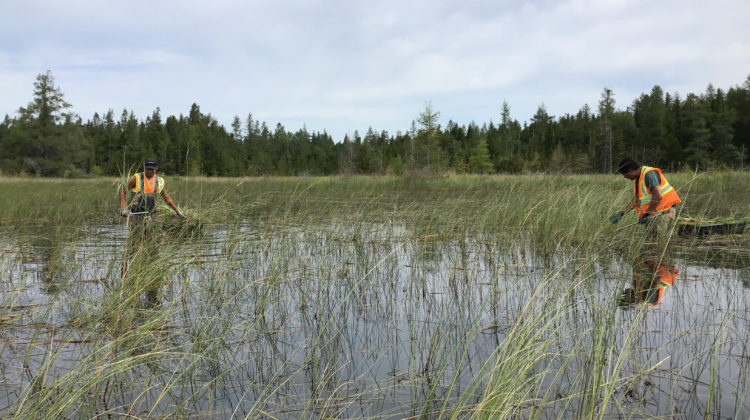 The Manitoulin Phragmites Project had a successful year despite having to deal with COVID-19 and the challenges it presented.

She says it was a bit tough this year because they lacked government funding, so the work did not begin until July 1st, but thanks to the support of local donors, they were able to operate on a week-by-week basis to clear the invader from different areas on Manitoulin Island.

Jones adds, as a result, they were able to clear large swaths of the grass protecting more marshlands on the Island.

She is happy to have found out they were granted three years of funding from the Ontario Species at Risk Stewardship Program, which will allow them to follow up on the south shore while continuing to work in turtle habitats and attract move volunteers.

Phragmites has been spreading aggressively on shorelines and in wetlands in our area. It is a serious threat to property values, recreation, tourism, wildlife and fish habitat, and aesthetics,” explains Jones. “Southern Ontario has lost hectares of natural habitat to this highly invasive species. The Manitoulin Phragmites Project was started to make sure that does not happen on Manitoulin.

She says the overwhelming goal is to get Phragmites down to a low level that can be maintained by ordinary people with a little bit of annual effort.

“We have just finished our fifth summer of work. We were so fortunate to have the work continue in 202o despite the virus. We began operating week by week from donations from our supporters: Manitoulin Transport, the Gosling Foundation, Escarpment Biosphere Conservancy, and the local community.”

Jones says some of the accomplishments this year was getting the growth under control in the Strawberry Channel area from White’s Point, the Sheguiandah FN pow wow grounds; the mouth of McLennan’s Creek on South Bay; the shoreline of Honora Bay from Freer Point to M’Chigeeng; and all of the Lake Huron shoreline — although Burnt Island Bay and Blue Jay Creek still need a little follow-up.

“We also began control at the Barrie Island causeway in Julia Bay and Rozel’s Bay with the help of some awesome volunteers. In partnership with Wiikwemkoong Unceded Territory continuing to work west across the top of South Bay with the Truxor cutting program, and now about two-thirds of that shoreline is under control. And all of the rest of South Bay’s shoreline is under control.”

Jones says there will be plenty of work to keep volunteers and members of the team busy.

“At least 30 more sites need work. We have not yet started work on the North Channel. In partnership with the Escarpment Biosphere Conservancy, we have applied for 2021 funding to pay for work there, so we are keeping our fingers crossed we’re successful,” concludes Jones.