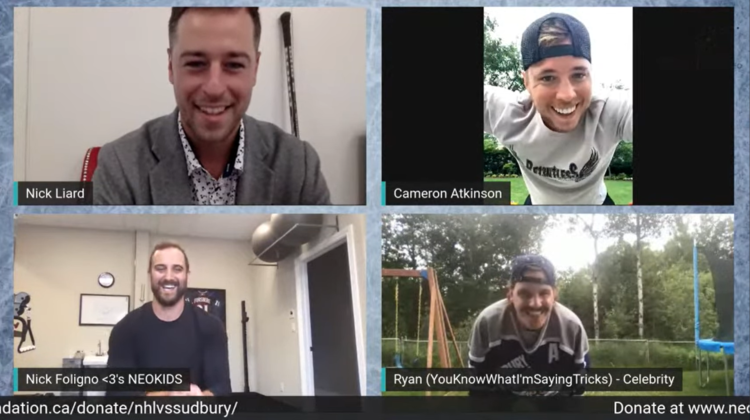 Cam and Ryan –Cam Atkinson is the winner of the first ever Vale presents: NHL vs Sudbury hockey skills competition. Photos provided by NEO KIDS

Over 230 spectators tuned in for the first virtual Vale presents NHL vs Sudbury in support of NEO Kids!
Local Sudburian celebrities and a few NEO Kids went head-to-head in a hockey skills challenge against NHL players including; Nick and Marcus Foligno, Tyler Bertuzzi and others.
The event raised over $78,900 and counting for our NEO Kids thanks to an anonymous donor who
matched the total funds raised from the virtual event.
The exciting match brought together some great match-ups, specifically for NEO Kid, Lennox. Lennox
went head-to-head with one of his heroes, Boone Jenner – Centre for the Columbus Blue Jackets. After a
nail-biting challenge, Lennox took the title of the winner and beat his favourite player! Not only did Lennox
beat Boone, but also beat Marcus Foligno by one point advancing him to the semi-finals. Another round
brought together Columbus Blue Jackets teammates Nick Foligno and Zach Werenski. Unfortunately,
Nick did not advance to the next round bringing Zach to the semi-finals! It was a close match throughout
the competition but in the end Columbus Blue Jackets forward, Cam Atkinson won the match taking the
title of the first-ever Vale presents: NHL vs Sudbury hockey skills competition winner! “We are incredibly
blown away by the generosity and support of the community for Vale presents NHL vs Sudbury – our
first virtual event. Every dollar raised from the event will advance our goal of keeping children as close
to home for care as often as possible. Your donations and support are directly impacting our youngest
and most vulnerable patients in Northeastern Ontario” said Anthony Keating, President and Chief
Development Officer for the Foundations and Volunteer Groups at HSN. “I would like to thank everyone
who made the event such a success, including the NHL players, our local celebrities and our NEO Kids!”

“We cannot believe the tremendous support we have received for this event,” said Nick Foligno,
Honourary Chair of NEO Kids Foundation and Captain of the Columbus Blue Jackets. “I would like to
thank all involved in making this virtual event such a success, especially the people who supported NEO
Kids and who continue to want to make a difference in our community. I would also like to extend my
sincere gratitude to my teammates who participated in the event, as well as the local celebrities and
NEO Kids who made the event such an incredible time!”

A special thank you to Vale, our title sponsor, our Sudbury celebrities, NEO Kids, the NHL players, our emcee Nick Liard, and the anonymous donor for making this event possible.

Donations will be matched until today and can be made online. 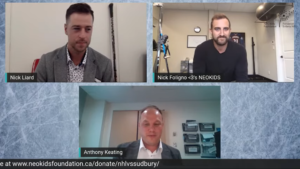 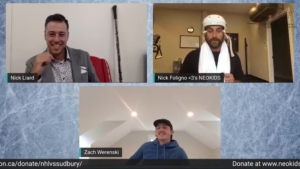 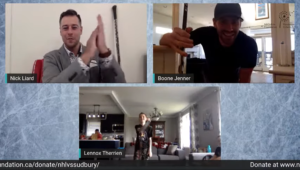