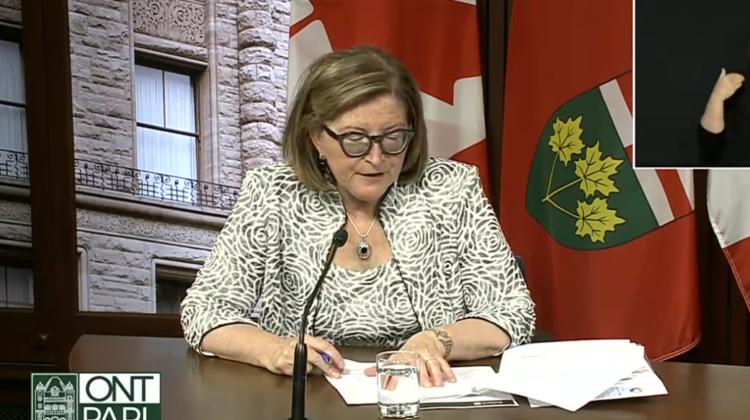 Courtesy of the Government of Ontario

While there was a slight bump in new cases reported on Saturday with 266 cases, Ontario Health officials say the number of new cases has remained relatively low in recent days.

The province’s Associate Chief Medical Officer says many health units have been reporting either no new cases or a very small handful.

Dr. Barbara Yaffe says of today’s 181 new cases, 28 of Ontario’s 34 health units are reporting five or fewer cases with 18 reporting no new cases at all.

She says a total 2,527 deaths have been reported since mid-March, with an increase of eight deaths since yesterday and 40 since last Thursday.

As for hospitalizations, currently 419 Ontarians are in hospital because of COVID-19, a decrease of 19 from yesterday and 108 since last Thursday.

Yaffe says while the province has seen eight new outbreaks in long term care homes over the weekend, outbreaks in institutions are by and large declining.

She says testing numbers have also remained above 20,000 tests per day since last week while the percent of those testing positive has continued to go down.

Yaffe says the province is now in the process of expanding data collection to mandate the reporting of data on race, income, language, and household size for people who have tested positive for COVID-19.

She says this will help get a more complete picture of the outbreak and eventually lead to better prevention and control of cases while ensuring the privacy of Ontarians is protected.