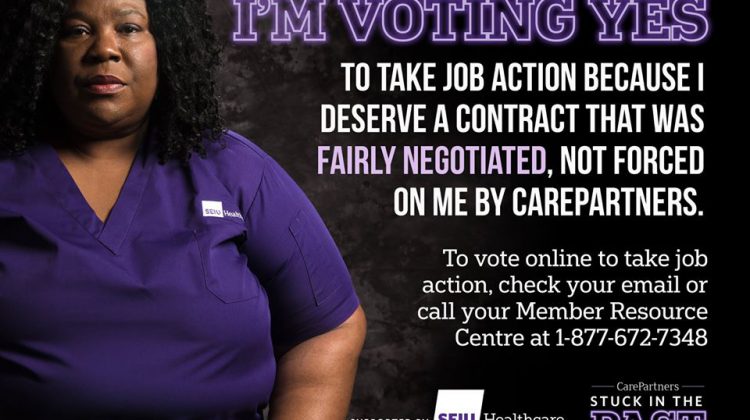 SEIU is hoping getting a good contract will attract more PSWs in Ontario. Vote Card supplied by SEIU

Personal care workers including those in the local area are rejecting a tentative deal reached by a home care company that oversees their union.

CarePartners, a for-profit home care company, is imposing a new contract on nearly 3,000 workers in Ontario that has been effectively rejected by the bargaining committee during negotiations.

Bargaining between Service International Employees Union (SEIU) and CarePartners began in January 2019 but resulted in a deadlock after nearly 11 months of negotiations with the last ratified contract expiring in March 2019.

According to SEIU, the company refuses to budge on several key issues: adequate wage increases, refusal to provide paid sick days, and others.

SEIU now has a vote underway online, which closes on January 29th, asking members to vote whether they want to take further job action.

CarePartners is one of only two providers contracted to provide services across all 14 regional health authorities, the Local Health Integration Networks (LHINs).