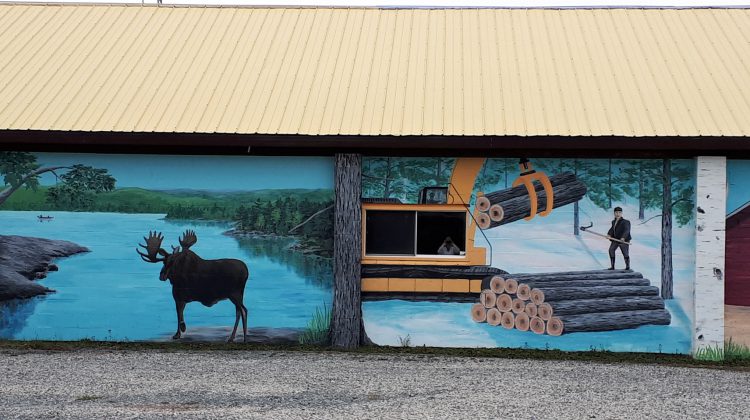 The Village of Walford has a rich history and a local artist has just completed a huge mural on one of the walls at the Walford Community Centre depicting that history.

Award-winning artist Theresa Minten says her family has strong ties to the centre, which her mother helped build as a member of the Women’s Institution and her father even put in the footings.

She says she was honoured when board members who oversee the hall asked her to paint her magic on the huge wall.

She says the wall was huge and incorporated four panels, several columns and two windows to work with.

She says the columns feature various kinds of trees found locally with the wall itself also featuring farming, fishing and a train station.

Minten paints mainly with acrylics, but started to paint with oils as a teenager. She has a degree in graphic design and worked in the printing industry. She was also a member of a number of art groups and trained with Victor Sullivan in Orangeville where she lived for many years.

Since moving back to Walford, she has focused on her art and was the featured artist at the 2016 Massey Area Museum’s Jesse Burnside Memorial Art Show and has won several awards in numerous shows including the LaCloche Art Show in Whitefish Falls. Her paintings are also showcased at Lucky’s Homestyle Restaraunt on Highway 17 in Walford and she hosts painting lessons at the centre itself.

Minten says the project was intriguing.  With her parents, Morris and Dolores Sanftenberg having such close ties the centre, it was also a labour of love.

For the first panel, she chose the train station, which is gone now, and a train which ran in the early 1900’s because having a station turned Walford into a bustling little place as they toted food and supplies of all kinds to the logging camps north of Walford during that period.

The logging section of the mural portrays the old and the new technology of this industry, which is and was so integral to the economy of this area.

She chose to paint a farm scene as that is where most people lived in the early days and those farms are now being worked again.

A moose looking out at people fishing in a boat on a pristine lake portrays the recreational opportunities and the majestic beauty that draws people to the area.

The columns became tree trunks, a birch, a white pine and a maple, which divided the panels but also incorporated themselves in each panel.

Minten adds she knew she would enjoy painting the mural, but never expected the overwhelming reaction she got from the community; people stopping by to say how much they loved it, some checking daily on her progress, some coming by just to say hello and see if she needed anything and plenty of people taking advantage of photo opportunities.

The public is invited to drop by anytime to view the completed work. 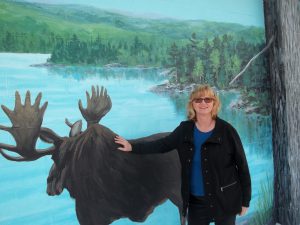 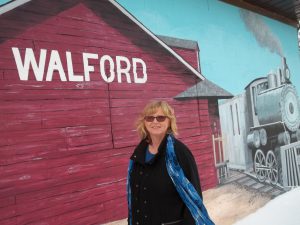 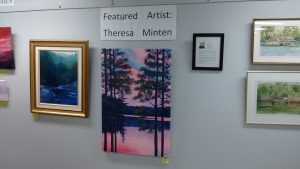