SPORTS: Express win with remarkable talent of their goaltender 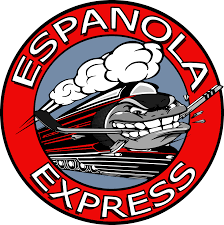 The season is over for the Espanola Express who lost out in the quarter-finals to the Soo Eagles. Logo supplied

The Espanola Express received a 52-save performance from goaltender Andrew Rocha that featured thwarting a last-second penalty shot in backstopping his side to a narrow 3-2 triumph over the Rayside-Balfour Canadians in Northern Ontario Junior Hockey League action Thursday at Chelmsford Arena.

Espanola’s power play got the Express on track 8:52 into the contest when Robert Brisson converted on a first-period man-advantage opportunity.

The visitors then tacked on another before the opening frame was complete as Zach Trempner scored for a second straight outing and ran a modest point streak to three games in a row.

After making 20 stops in the opening frame, Espanola starting netminder Rocha made another 20 saves in a scoreless middle session to keep the score 2-0 for the Express after 40 minutes.

Down a skater midway through the third, the guests tacked on another on Matais Salem’s shorthanded effort.

The Canadians got one more in the late going when Dokis-Dupuis connected on the power play with 31 seconds remaining to pull within one.

Then with time almost set to expire, the officials ruled an Express defender intentionally dislodged the net from its mooring and thus a penalty shot was awarded.

It was Dokis-Dupuis who came in to try and hit a hat trick and also force overtime, but he was denied by the right pad of Rocha who secure the road victory in dramatic fashion.

Cameron Lamour in the Rayside-Balfour net faced 45 shots in defeat.