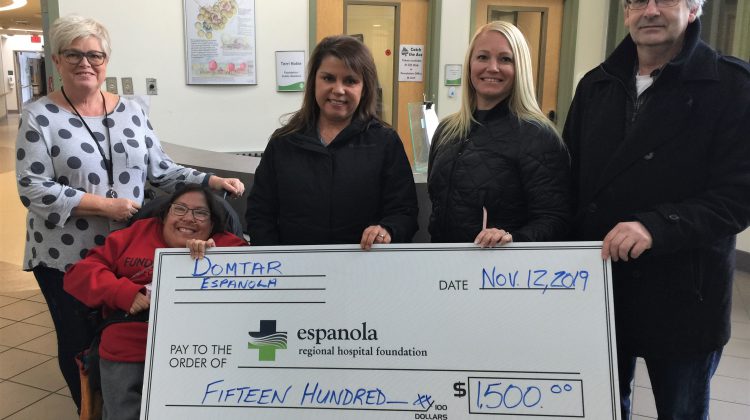 An Espanola woman has received funding for a vein finder from a local business helping her nearly reach her goal.

Domtar Espanola presented Jolene Courtemanche with a cheque for $1,500 towards her goal of $8,100 for a vein finder.

Courtemanche, who has received medical care throughout her life says the vein finder will help people like her who have to constantly have blood work done.

She says with the funds from Domtar, she is very close to the total amount of money needed, which she hopes to reach by early December.
The presentation was made at the Espanola Regional Hospital Foundation this week.

PHOTO: An Espanola woman, Jolene Courtemanche, has been presented with a $1,500 donation from Domtar – Espanola to go towards her campaign to raise $8,100 for a vein finder for the Espanola Regional Hospital. On hand for the presentation is (l-r): Espanola Hospital Foundation representative, Terri Noble, Courtemanche, Domtar – Executive Assistant, Darla Southwood, Domtar – Human Resources, Angela Vuorensyrja and Domtar – Manager of Engineering, Joe Cooper. Photo by Rosalind Russell – myalgomamanitoulinnow.com staff