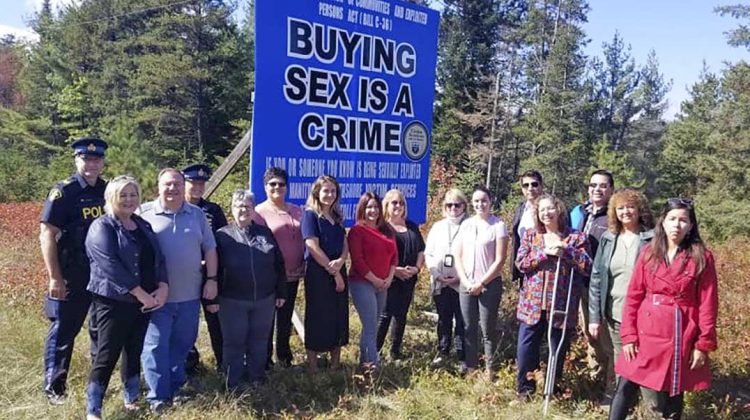 A new billboard sign between McKerrow and Nairn Centre has a blunt message: buying sex is a crime. The Manitoulin Northshore Victims Services has joined up with the Manitoulin and Area Coalition against Human Trafficking in the signage campaign. Various supporters including police attended. Photo supplied by VCARs

A new billboard sign between McKerrow and Espanola is pretty hard to miss, especially since its’ message hits hard: buying sex is a crime.

The sign is a joint project between Manitoulin Northshore Victims Services and the Manitoulin and Area Coalition against Human Trafficking.

Natasha Falle, Anti-Human Trafficking Project Co-ordinator says there are very vulnerable people in the communities on Manitoulin Island and the North Shore.

She adds the highway signage is deliberately located on Highway 17 because it is part of what she calls the circuit in prostitution, especially being so close to Sudbury.

Falle adds women make up the bulk of the victims and collectively, people of all genders younger than 25 years old make up 72 percent of victims.

And of that, 70 percent are women.