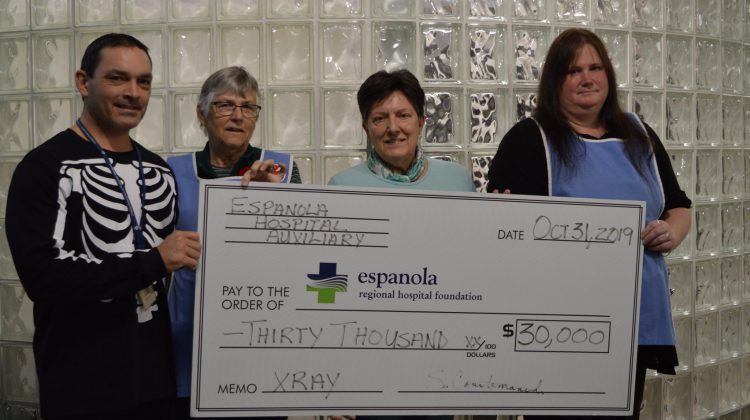 The Espanola Regional Hospital Auxiliary has kick-started the new campaign for a retrofit of the x-ray suite at the hospital in a big way. Members presented a cheque for $30,000 last Thursday, funds they have raised for the last year. Photo provided by ERHHC.

The equipment in the x-ray department at the Espanola Regional Hospital is near the end of its service life and the hospital foundation is taking on a major campaign to raise funds for its replacement.

She says the retrofit will cost just over half-a-million-dollars and the fundraising is off to a great start with the hospital auxiliary donating $30,000 to the project last Thursday.

Noble says the fundraiser will be part of The Moose Annual Charity Radiothon on CJJM on December 13th.

To make a donation, which can also be made in memory of someone, contact Terri Noble at the Espanola Regional Hospital Foundation office by calling: 705-869-1420 and ask the operator for the foundation office or email your inquiry directly to her at [email protected]

If you would like to present a cheque at the radiothon on behalf of a group, organization, club, business or as an individual, Terri can also discuss that with you to make the appropriate arrangements.