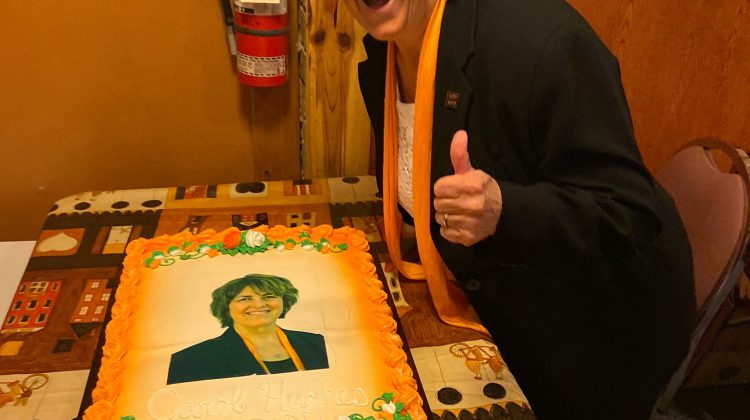 The NDP incumbent for the Algoma Manitoulin Kapuskasing riding is heading back to Ottawa.

Carol Hughes has won a record fourth term as MP for AMK.

She says she couldn’t have done it without the tremendous support of literally hundreds of people.

Hughes also thanked the candidates for taking part in the process.

Conservative Party candidate, Dave Williamson and Liberal Heather Wilson were neck and neck most of the night with Williamson taking 26.3 percent of the vote and Wilson 24.3 percent.

The le Marquis de Marmalade for the Rhino Party garnered 124 votes for his efforts.

In Sudbury, Liberal incumbent Paul Lefebvre managed to retain his seat, as did his Nickel Belt counterpart Marc Serré.

The Nickel Belt race was tight, and it took quite a few poll results before the riding was declared for Serré after NDP newcomer Stef Paquette mounted a strong challenge.

Across the 10 northern ridings, the Liberals held onto six seats.

The Conservatives also held onto the riding Parry Sound-Muskoka. The riding was held since 2006 by Tony Clement, who was forced to resign in November 2018 following a sexting scandal.

Despite this, the riding still went blue this time out, with former Huntsville mayor Scott Aitchison making the successful transition from municipal politics to federal.

As expected, popular Timmins-James Bay NDPer Charlie Angus held onto his seat for the sixth time. His counterpart in Algoma-Manitoulin-Kapuskasing, Carole Hughes, was also re-elected.

In the Sault Ste. Marie riding, Terry Sheehan kept the riding red with his re-election.

Moving farther west, Thunder Bay-Rainy River stayed Liberal with the election of Marcus Powlowski. The riding was represented by another Liberal, Don Rusnak, who announced back in March that he wouldn’t be seeking re-election.

And in Thunder Bay-Superior North, Liberal Patty Hajdu was re-elected to a second term.

The Liberals will head back to Parliament Hill with a minority government.  The party has been elected or is leading in 156 ridings. Justin Trudeau has been re-elected in his home riding.  The Conservatives have 122 ridings with leader Andrew Scheer re-elected.  Jagmeet Singh won his seat and the NDP has 24 ridings.  The Bloc Quebecois took 32 ridings.  The People’s Party of Canada is not reporting and leader Maxime Bernier did not get re-elected in his riding.  The only independent to take a seat tonight was Jody Wilson-Raybould in her Vancouver-Granville riding.  Wilson-Raybould made the decision to run as an independent after being booted from the Liberal party over the SNC-Lavalin affair.