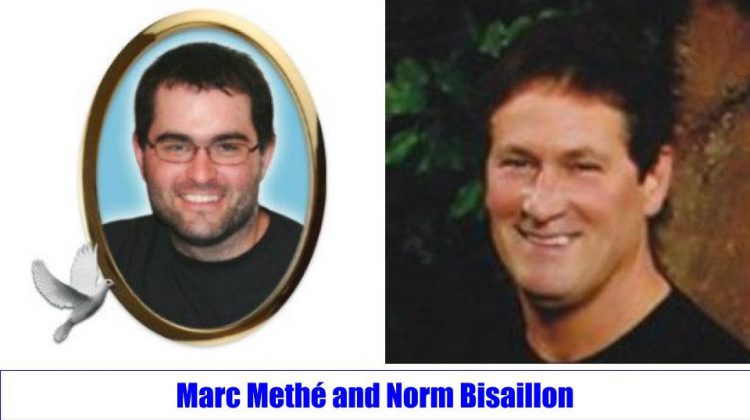 Poor mining practices are being blamed for a fall of rock that killed Marc Methé (MARC MA-TAH) and Norm Bisaillon (BIZ-I-YAW)and the five-member jury is recommending several safety measures and training be put in place at any mining work site. Photo collage by Rosalind Russell – myespanolanow.com/myalgomamanitoulinnow.com staff

The death of two miners at Lockerby Mine was preventable, according to a five-member coroner’s inquest jury, and they are calling for more training and safety measures to prevent future deaths.

The jury heard poor mining practices are being blamed for the fall of rock that killed Marc Methé and Norm Bisaillon on June 6th, 2014.

The inquest heard the two men were smothered to death by a fall of material as they worked at the mine’s 6,500-foot level.

A Ministry of Labour lawyer testified poor mining practices that led to the unsafe working conditions preceding the men’s deaths.

The jury put forth seven recommendations directed at various ministries.

The men worked as subcontractors with Taurus Drilling Services.

The company was found not guilty of all charges.

However, the owner of the mine, First Nickel was fined $1.3-million but went bankrupt in August 2015.

The following is the complete list of jury recommendations:

The CORONAVIRUS REPORT for FRIDAY, APRIL 17, 2020 – First case of community spread in Algoma – two in Sudbury and so much more

Feeding the children – program in Algoma