Dedication of Legion banners – Byers; “Any day we remember is important …” 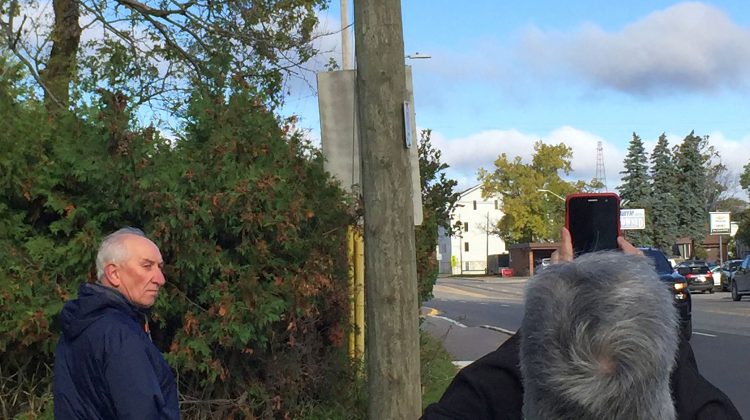 The Byers see their son's banner for the first time erected along Highway Six - Centre Street in Espanola. JJane says every day that someone remembers David is important, be it his birthday, anniversary, Remembrance Day. Espanola Royal Canadian Legion President and Chaplan, Gary McPherson, dedicates the banners through prayer on Wednesday, October 2nd. Twenty-seven banners have been erected this year. Sixty were purchased, so they will be rotated year-to-year. McPherson says Espanola is the first Northern Ontario Community to erect banners in honour of veterans, living and dead. The banners will remain in place until after Remembrance Day ceremonies are complete. Photo by Rosalind Russell - myespanolanow.com/myalgomamanitoulinnow.com staff

Jane and John Byers remember their son every day, and Jane says every day that someone remembers David is important, be it his birthday, anniversary, Remembrance Day.

The couple was invited to the prayer commemoration of the new Remembrance Banners mounted along Highway 6- Centre Street on Wednesday, October 2nd.

The two were moved that their son’s banner was the first to be erected at the south entrance of the town and on the right side of the road, followed by Corporal Glen Arnold’s banner.

Their son, Private David Byers, 22, was killed September 18th, 2006, along with Cpl. Arnold, 32, of McKerrow, when a man riding a bicycle detonated a bomb while they were distributing gifts and candy to children in Panjwaii district. The Arnolds were unable to attend the commemoration for personal reasons.

Jane says she has seen the banners in other locations across Canada but believes it is very special for “our town to be honouring our fallen and serving members. It’s part of our history and without that history, they will be forgotten.”

As part of that history, Jane was not pleased with the lack of process when it comes to a national monument that was to be built in remembrance of those who died in Afghanistan. She says the Kandahar Airfield Cenotaph dedication this summer was not the national monument.

The rededication of the Kandahar Airfield Cenotaph took place at the new National Defence headquarters in west-end Ottawa in mid-August, which she attended. The ceremony was closed to the public.

The weekend event was organized after the Canadian Forces faced intense criticism from the families and the public when it dedicated the cenotaph in late May with only senior officials present. The event was inexplicably kept secret for several days until the military quietly announced it but only on social media. Chief of the Defence Staff Gen. Jon Vance later apologized for the military’s mishandling of the event.

The cenotaph at Kandahar Airfield became a symbol for many Canadians of the losses during the Afghan war. Canadian Forces personnel and Afghan employees originally built it in 2006 and added to the monument over time.
On the cenotaph are plaques that honour 158 Canadian Forces members who died as well as Foreign Affairs official Glyn Berry, Calgary Herald journalist Michelle Lang, and Marc Cyr, a civilian from a company under contract to the DND.
Other plaques honour 42 U.S. military personnel and one civilian who died while serving under Canadian command. The cenotaph was dismantled and transported to Canada from Afghanistan in 2011.

The Byers would still like to see the national monument built.

“They promised the national day of honour five years ago, but it hasn’t been built, let alone started yet,”  she says, obviously disappointed by the lack of action. However, Jane says she has spoken to the Ontario premier and that process is moving a lot faster.

“On the provincial side, Ontario is beginning the process. The premier (Ford) has told me that it is moving forward. “

In the last week of September, Ford’s government announced the next steps toward building a memorial to honour Canadian veterans of the war in Afghanistan.

PFS Studio — a leading Canadian planning, urban design and landscape architecture firm — will design the memorial. PFS Studio also designed the Ontario Veterans’ Memorial, which was unveiled in 2006 on the Legislative Assembly grounds.

“We are fulfilling our commitment to building a memorial to pay tribute to the Canadian Armed Forces personnel who served in the war in Afghanistan,” said Lisa MacLeod, Minister of Tourism, Culture and Sport. “Today’s ( announcement of the design studio and consultation panel brings us one step closer to ensuring we honour the more than 40,000 men and women in uniform who put their lives on the line to protect our freedom.”

To provide input on the design of the memorial, the government has also established a consultation panel that consists of members with a variety of backgrounds, including military veterans and those with a connection to the Canadian Armed Forces. The panel is chaired by General (Ret’d) Rick Hillier, who commanded a NATO mission in Afghanistan and was Chief of the Defence Staff of the Canadian Forces from 2005-2008.

“With design expertise from PFS Studio and important advice and input from the consultation panel, this memorial will be a permanent expression of Ontario’s gratitude to this new generation of heroes, their families and their descendants,” added Minister MacLeod.

The Memorial to Honour Canadian Heroes of the War in Afghanistan will complement the existing Ontario Veterans’ Memorial to emphasize the importance of the war in Afghanistan in modern Canadian military history. While work is still ongoing, the government expects to unveil the memorial’s design later this year following additional consultations with the panel.

“We believe this memorial will touch every veteran who served in Afghanistan,” said General Hillier. “Each of them, and their families will eventually visit and recognize the pride that Canadians have in what they accomplished, often at an enormous personal cost. We are proud of them, what they did, how they did it and appreciate the service and sacrifice for our great country. We want this memorial to reflect that pride.”

The war in Afghanistan was Canada’s largest deployment since the Second World War, involving more than 40,000 men and women of the Canadian Armed Forces. In total, 158 Canadian soldiers and seven civilians were killed during the war in Afghanistan, and almost 2,000 were wounded.

The Ontario Veterans’ Memorial was unveiled in 2006. It is a 30-metre long granite wall engraved with scenes from Canada’s military history.

The banners provide both the Byers and the Arnolds with another way to honour their sons and mark their ultimate sacrifice in the service of their country. The campaign was so successful, 60 banners were purchased, so they will be rotated year-to-year on the main thoroughfare. The banners will stay in place until shortly after Remembrance Day – November 11th, 2019. 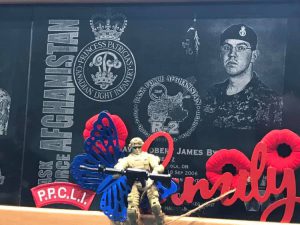 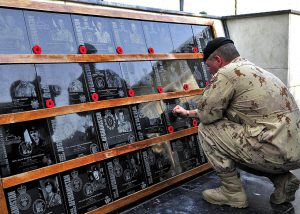 AR2011-0550-001
Kandahar Airfield
11 November 2011
Director of Staff, Strategic Joint Staff, Major-General Jonathan Vance places poppies on every plaque on the Memorial of the Fallen at Kandahar Airfield during the last Remembrance Day ceremony in Southern Afghanistan on November 11, 2011.
The last Remembrance Day ceremony of Joint Task Force Afghanistan took place on November 11, 2011 and saw hundreds of soldiers from the Mission Transition Task Force, commanded by Brigadier-General Chuck Lamarre, on parade in front of the Memorial, which stands as a tribute to Afghanistan’s fallen.
Photo: Sergeant Lance Wade, MTTF HQ
© 2011 DND-MDN Canada

The Byer’s stand in front of the banner dedicated to their son, Dave Byers. Photo by Rosalind Russell – myespanolanow.com/myalgomamanitoulinnow.staff 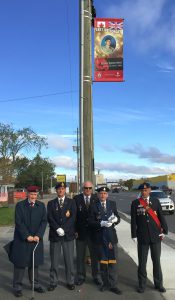