There was plenty of orange to be seen in communities throughout the local area including Shawanosowe School in Whitefish River First Nation.

Chief Franklin Paibomsai was just one of several chiefs, band councils and community members who marked the seventh anniversary of Orange Shirt Day, which encourages all Canadians to wear orange in solidarity and remembrance of the residential school survivors.
The day is based on a book of experiences written by Phyllis Webstad called The Orange Shirt Story where she wrote about her first day at a residential school where she was forced to remove her bright, orange shirt because it was considered inappropriate apparel by the nuns. 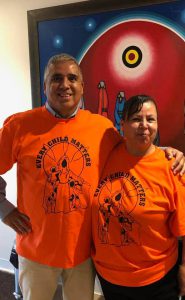