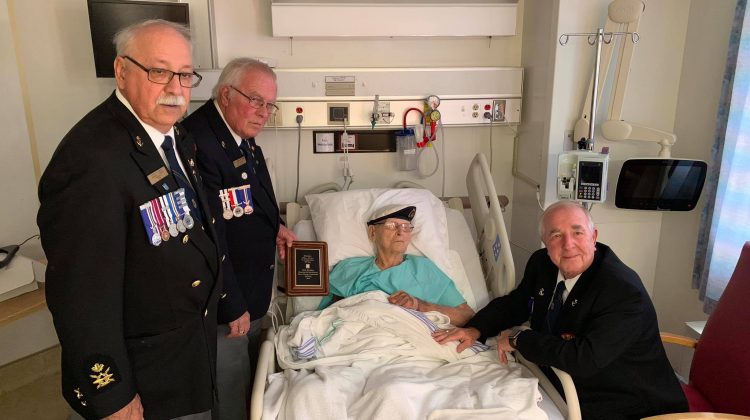 Allan Tustian turned 100 this week. His contributions during the Second World War, and after, were acknowledged with cake, certificates and plaques with shipmates and family on Saturday. He served on three different warships including the HMCS Timmins during wartime. Photos provided by Roy Eaton, WW2 archives and Veterans Canada.

Friends will be received at Trinity United Church, Mindemoya today, Friday, October 11, 2019, from 2-4 pm and 7-9 pm, where a  service of Celebration will be held on Saturday at 11 am. Interment to follow at Mindemoya Cemetery.

A Manitoulin Island naval veteran who saw action on D-Day turned 100 this week.

Allan Tustian was one of Canada’s first Asdic operators, commonly-known as sonar, which detected submarines during the Second World War.

Tustian served for four years from 1941 to 1945 including the Battle of Atlantic and the landing at Normandy during D-Day.

His contributions were acknowledged this weekend in Mindemoya by shipmates from the Manitoulin North Shore Naval Veterans, which he also assisted in establishing 35 years ago, as well as family and friends.

Tustian served on three Royal Canadian Navy warships — a destroyer, a corvette and a frigate, including the HMCS Timmins, on escort for 43 convoys in the Battle of the Atlantic. He also saw service in D-Day events.

For his distinguished war service, Tustian was awarded the 1939-1945 Star, the Atlantic Star with the France and Germany Clasp, the Canadian Volunteer Medal, and the War Medal.

He returned to Manitoulin Island, Lake Mindemoya and Treasure Island Lodge. It was on Treasure Island that he met his future wife, Alma Smeltzer. Tustian and Alma were married on February 17th, 1950.

Tustian is the father of six children, four boys and two girls, grandfather to 15 grandchildren and 10 great-grandchildren. 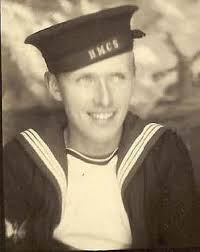 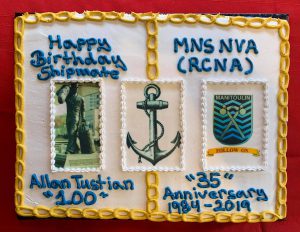 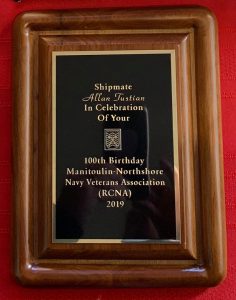 Ontario looking at “regional approach” for Stage 2 of re-opening