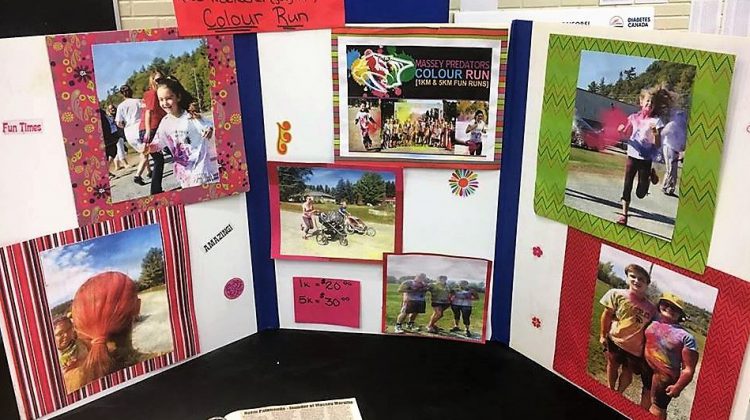 The Friendly Massey Marathon also includes some fun events on Saturday including the Predators Colour Run to raise funds for the local minor hockey league. Photo supplied by masseymarathon.com

This is the 42nd year for the Friendly Massey Marathon founded by Norm Patenaude decades ago.

Brady Ropp is one of the volunteers. He and his crew, including volunteers, are gearing up once again to host some 200 to 250 runners, not only from the local area, but across Ontario, and even, from out of the country.
The Friendly Massey Marathon is also a qualifier for the Boston Marathon, so it holds a special place in many people’s heart, especially as it winds its way through the beautiful area surrounding the Spanish River.

Ropp says he is as surprised as anyone else to find out how participants covet the wooden milk stools given out to everyone who registers and takes part in the event, which also includes the 30th Spanish River Half Marathon, the 12th Chutes 10 Kilometre and Fourth Annual Family Five Kilometre runs, as well as the Massey Predators Colour Run.

“It’s amazing to see how many people love to come out to the event and take part. Norm Patenaude would certainly be proud,” says Ropp. “He was very enthusiastic about the sport itself and he really helped shape the foundation of road running in Ontario.

“We continue his legacy in his honour.”

Ropp says he doesn’t know the story behind the wooden milk stools, but they have become a staple of the race.

“I wish I knew how it came about and I am going to try and find out,” says Ropp. “It is crazy how people share their stool stories, how they are so proud to possess one, how much of an honour it is.

“Everyone wants to win one because they carry such prestige in the racing world. You wouldn’t think it would be the prize that it is, but people crave them.”

Who can win one? “Everyone who registers and runs, walks, takes part. It is that simple. They are made for us by Rustic Craft out on Skead Road, so they are all hand-made making each one unique,” explains Ropp.

It all takes place the weekend of July 20th. Registration takes place on Saturday with the 20 K and 5 K races taking place, then capped off with the annual Spaghetti Dinner. That’s followed by the full- and half-marathons Sunday morning, bright and early at 6:00 am, with the annual Pancake Breakfast also taking place. The day is capped off with medals, qualifying times and the stool presentations. Will you get yours this year? Any age, anyone is invited to take part.

Volunteers are also much appreciated.