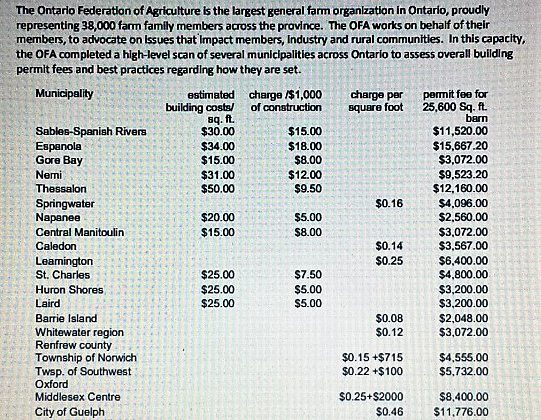 A Sables-Spanish Rivers Township dairy farmer, John Mooney, wants to know why there is such a disparity between building permit fees in different municipalities. He presented a graph by the Ontario Federation of Agriculture showing the range of fees. Photo by Rosalind Russell – myespanolanow.com/myalgomamanitoulinnow.com staff

It seems that municipal councils have little, if any, control over what is charged for building permits.

That didn’t sit well with Sables-Spanish Rivers Township dairy farmer, John Mooney, who has been charged over $11,000 for a building permit to expand his barn.

Building inspectors, Dan Rivet, and Mike Campbell, appeared before township council on Wednesday to explain the process to the council and the attending farmers.

They stress they do the work in assessing what building permits are needed, carry out the inspections and sign off on projects, but do not set the fees.

Mooney says he realizes he has to pay building permit fees but wants to know why there is such a disparity between different municipalities, presenting a graph by the Ontario Federation of Agriculture.

The matter may be raised with government officials at the upcoming Association of Ontario Municipalities conference next month.