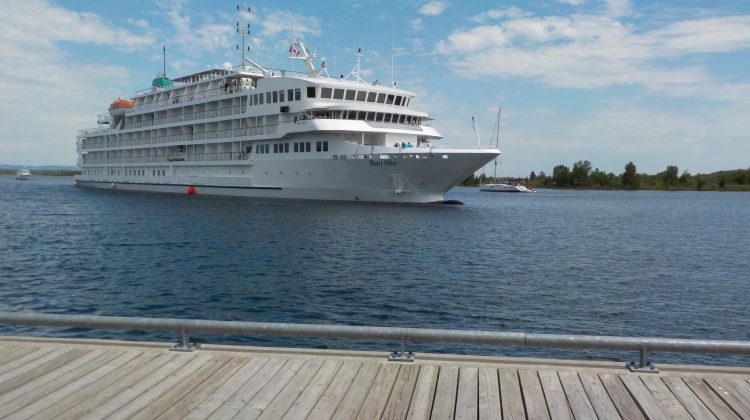 The water levels on Lake Huron are high and that is causing challenges for some of the cruise ships coming in to dock in Little Current, such as The Pearl Mist seen here arriving in port in 2018. Photo by Rosalind Russell – MyEspanolaNow.com/MyAlgomaManitoulinNow.com staff.

The cruising season is underway and the high water levels is causing some problems for the big boats.

Damage was done to the dock in Little Current last week when a cruise ship slammed into the dock wall.
The Victory 1 cruise ship caused damage to the main dock wall more so since it has steel fenders, not traditional rubber ones.

The side thruster caused the boat to rock, slamming the steel fenders on top of the concrete portion of the dock, breaking off a piece and the dock’s wooden rub rails were also broken.
The Victory 1 will now anchor nearby and bring visitors into downtown Little Current via much smaller boats.