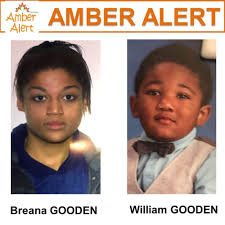 An Amber Alert has been issued for William Gooden, 3, who was last seen with Breana Gooden, 25, on a bus from Sudbury to Toronto. (PHOTO: OPP)

An Amber alert has been cancelled.

An Amber Alert was issued this morning for a three-year-old boy who was last seen on a bus travelling to Toronto from Sudbury on Monday.

Greater Sudbury police say it is believed the two boarded an Ontario Northland bus and it would have arrived in Toronto late yesterday.

It is also believed they may be somewhere in Toronto.

William is described as three-feet tall with a heavy build and short black hair.

Breana Gooden is believed to be five-foot-six, 150 pounds, and has black shoulder-length hair.

Police are asking anyone with information to contact Ontario Provincial Police at 1-888-310-1122.

He was wearing a blue T-shirt, black pants, a red and white jacket, and a Montreal Canadiens hat.

She was wearing a black sweater, black tights, a gold skirt, and pink and white shoes.

Police also say she has a tattoo of a lion on her left forearm.