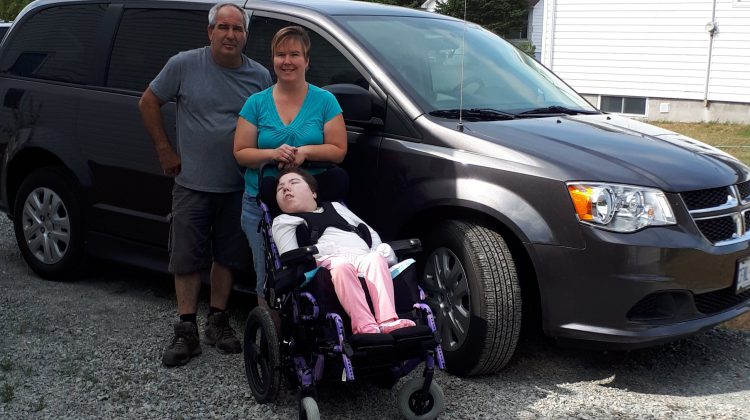 Emily Richer, 13, the daughter of Julian and Lisa Richer of Massey, needs ongoing medical care and a fundraising campaign to help the family obtain a new wheelchair accessible van was successful. The new van arrived this weekend. Photo by Lisa Richer

The generosity of people in the Espanola and North Shore corridor is well known, more so when it comes to helping out families who need assistance with their children.

The May/June Go Fund Me Campaign to raise money for a new modified van for the Richer family of Massey is one example. Lisa and Julian Richer’s daughter, Emily, needs to travel to Sudbury and Toronto for ongoing medical care, but the family’s 2007 van was starting to fall apart.

Lisa says the support from the community was inspiring.

“Thank you again to our anonymous benefactors as well as to everyone else who made a donation no matter how big or small, every bit helps and boy you helped us in a BIG way,” said Lisa. “The March of Dimes weren’t part of our actual GoFundMe, but we did qualify for $15000 dollars from them towards the van modifications. Without their assistance with the modifications, we would not have been able to pay for the few extras we needed.”

The van was modified by Silver Cross Automotive.
“Thanks to Shelley from Silver Cross Automotive for the amazing customer service, I know it’s her job but she went above and beyond and was excited about the process as we were.
“She not only arranged to have our van delivered to us in South River, but also met us in Parry Sound with the demo model a few weeks before so that we could make sure the modification we were looking at was definitely what we needed.

“Thanks to Grant and Brenna from Driverseat Mississauga South for donating their time to bring our van to South River and to bring Shelley back home so that we didn’t have to go all the way to Toronto ourselves to get it, allowing us to avoid that highway until our trip to Sick Kids for Emily’s surgery at the end of September.
“ Thank you also to the media who shared the initial fundraising story and updates time and again, as well as to those who shared it tirelessly on Facebook.”

Lisa says when they started the process at the end of May, they were looking at used vans and a simple Q-straint system, like in their old van and we would have been more than happy with that, but that was no longer possible. Lisa says there are practical reasons why this is needed.
“We went through a roller coaster of emotions when we were informed that we were not able to do that any longer because of body changes to the Dodge Caravan, which is the van we needed so that someone is able to sit beside Emily to suction her when we are travelling.

“We also rear face Emily in the van, so that we are able to see her face. We don’t have to unbuckle to suction her and so that the sun is never directly in her face. Even though she is visually impaired, Emily is very sensitive to sunlight.
“We were shocked at prices of the modifications compared to the Q-straints and wondered how on earth we were ever going to manage but again, thanks to all of you, we did more than that just manage. “We not only went into a brand new 2018 Dodge Grand Caravan, with the exact modification we needed, we were able to pay insurance for a year up front, have the windows tinted and are planning to have it undercoated. Winter tires are also in the plans.”

Lisa says they are still a little overwhelmed by the generosity of people to help them. Over $60,000 was raised through the campaign, which ran through the months of June and part of July.

“We are still more than a little shocked that we have a brand new van sitting in our driveway that we will be able to use for years to come to safely transport Emily to her numerous appointments in Toronto and Sudbury,” said Lisa. “And, we will always and forever be grateful for that. We are truly blessed and I really hope that someday we are in a position to pay it forward. Thank you.”