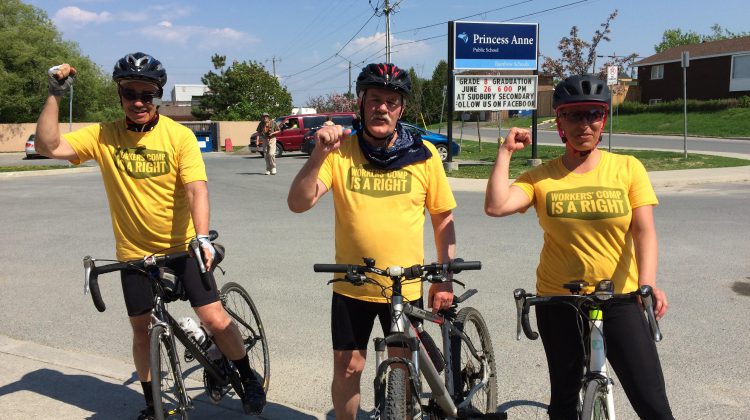 The Jim Hobbs Memorial Ride was held this weekend recognizing the significance of occupational disease on the province’s workforce while honouring Hobbs and other miners impacted by McIntyre Powder exposure. Photo provided by Janice Martell.

Massey’s Janice Martell says she is astounded by the number of people who came out to be part of the Ontario Network of Injured Workers Groups Fourth Annual Justice for Injured Workers Bike Ride.

The ride was held this weekend between Massey and Elliot Lake in tribute to her late father, Jim Hobbs.

The members recognized the significance of occupational disease on the province’s workforce while honouring her father and other miners impacted by McIntyre Powder exposure.

Over 80 people attended the seminar on Friday followed by the ride itself on Sunday and wrap up in Sudbury Sunday evening with a Sudbury Labour District Council meeting.

She adds it is difficult to put into words all of the overwhelming sense of support and solidarity – occupational disease is very isolating for families, as is being an injured worker.

The Ride provided such a sense of connection, kinship, and solidarity – showing the leaders of Ontario that we are united in our efforts to overhaul the WSIB system and ensure fairness for workers and their families, Martell added.

MORE ON THE STORY: THE JIM HOBBS MEMORIAL RIDE – IN JANICE’S OWN WORDS: by Janice Martell
FRIDAY: The weekend was INCREDIBLE! We had wonderful speakers at the Elliot Lake public seminar, with 80 in attendance.
I presented on McIntyre Powder history and my research discoveries from my McIntyre Powder Project work.
Following me was Dave Wilken [Chief Operating Officer for the Occupational Health Clinics for Ontario Workers, Inc. (OHCOW), and their lead on the McIntyre Powder-exposed worker group]. Dave provided updates on OHCOW’s efforts to assist the almost 500 McIntyre Powder-exposed mine workers who have registered with OHCOW at and since the 2016 McIntyre Powder Intake Clinics that were held in Timmins and Sudbury.
A team of three from the Northern Ontario School of Medicine/Laurentian University then presented on radon and McIntyre Powder, as they are doing research work on potential synergistic effects of combined exposures to McIntyre Powder and radon.
The team consisted of: Dr. Douglas Boreham (an Elliot Lake native who lost his own father to mining related lung disease), Andrew Zarnke (a PhD candidate studying radon and McIntyre Powder – he has had the McIntyre Powder analyzed in a specialized lab in France), and Dr. Christopher Thome (who is involved with the work that Andrew is doing at SnoLab in Sudbury).
Rounding out the speakers was Dr. Paul Demers, an epidemiologist with the Occupational Cancer Research Centre (Cancer Care Ontario) reviewed carcinogens found in mining environments and occupational disease rates in mine workers. He also discussed the initial phases of OCRC’s planned epidemiological study of neurological disorders in Ontario miners who were exposed to McIntyre Powder (as compared to the general population, and as compared to miners who were NOT exposed to McIntyre Powder).
SATURDAY: On Saturday, May 26, the “Jim Hobbs Memorial Ride” kicked off at 7 a.m. at the Elliot Lake Miners’ Monument. Three ONIWG cyclists made the trek (Nicole Simpson, Allen Jones, and Peter Page), plus two of my co-workers from OHCOW: Dr. Kevin Hedges, an Occupational Hygienist with OHCOW, and Cheryl Baker, who is a Client Service Coordinator at OHCOW. Both are working with the McIntyre Powder-exposed worker group at OHCOW. Cheryl cycled the Hwy 108 leg and the remaining four cyclists continued on to the Massey Arena where they were greeted by my family and OHCOW staff.
Joining us us for an afternoon luncheon and celebration were the Manitoulin & North Shore Injured Workers Group and AMK MPP Carol Hughes Carol spoke about the need to address deficits in the WSIB system to ensure fairness for injured workers and those workers who suffer (or die) from occupational diseases. The family photo includes Carol with the Jim Hobbs family, including: (Back Row, left to right) – my dad’s best friend Dick Owen, his wife, Helen, Carol Hughes, my sister-in-law Rose Zarichney, my brother Jim Hobbs, my sister, Charlene Pellarin, my brother-in-law, Len Demers, my aunt Ruth Hobbs, my uncle Harry Hobbs (dad’s brother). (Front Row, left to right): me, my sister Linda Demers, my mom Elaine Hobbs, and my daughter, Jessica Rogers. Fun fact: in 1970, my dad and a friend Vince Gauthier walked from Sudbury to Massey to raise funds to build the Massey Arena. We held my Dad’s funeral there on June 3, 2017.
SUNDAY: Sudbury was great. We walked the last kilometre with the cyclists. Speeches at the Steelworkers Hall followed by a BBQ. A Sudbury District Labour Council event also started at 3 p.m. to welcome the cyclists and focus on recognizing mine workers who died of occupational diseases. I was there with McIntyre Powder Project display booths, as well as the miners’ coveralls for signing.
Photos provided by Janice Martell