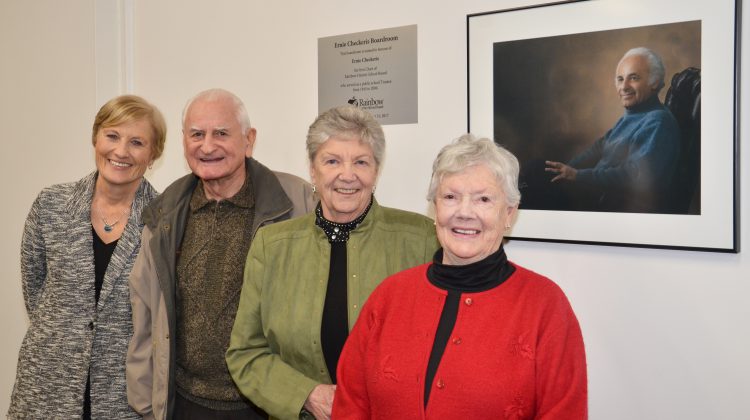 The boardroom in the Rainbow District School Board Centre for Education has been named in memory of Ernie Checkeris. From left of photo, Muiriel MacLeod Checkeris, Frank Benish and Vicki Kett, who served as trustees together, attended the dedication. During the tribute, Board Chair Doreen Dewar called Ernie Checkeris “a pillar in the educational community, locally, provincially and nationally.” A Trustee with Rainbow District School Board, the former Sudbury Board of Education and its predecessor boards for 55 years, Ernie Checkeris has the distinction of being one of the longest-serving trustees in Ontario. Photo supplied

The historic occasion was marked by an Indigenous ceremony, the naming of the boardroom in honour of Ernie Checkeris and a special presentation by a former Principal of Wembley Public School.

Following the traditional First Nation opening, the boardroom was named in memory of Checkeris.

Checkeris has the distinction of being one of the longest-serving trustees in Ontario, 55 years in all.

Wembley Public School, the site of the new board office, will serve as the Centre for Education for all English Public students in Sudbury, Espanola, Manitoulin Island and Shining Tree.