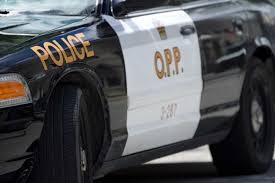 One person is dead and another injured after two tractor trailers collided on Highway 69. Photo supplied

An Elliot Lake man is facing a couple of charges after being spotted by OPP in Elliot Lake.

The police say they stopped the man on a motorized scooter.

Scooters are considered a vehicle under the Highway Traffic Act.
Police were familiar with him and knew he had a driver’s license suspension.

The man was arrested and the scooter towed.

The 59-year-old faces charges of driving while disqualified and failure to comply with a probation order.

He is to appear in Elliot Lake court on October 31st.