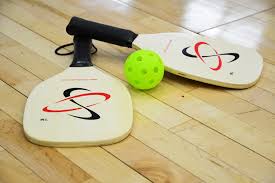 There is no business plan and no concrete financial numbers, but Elliot Lake councillors have passed a motion to work with an American billionaire on possibly having pickle ball courts built as part of a multi-use facility.

Pickleball is played on a badminton-sized court with a perforated plastic ball and paddles about twice the size of table tennis paddles.
Elliot explained to council Mr. Kuhn is willing to spend his own money to see the facility located in Elliot Lake and to work with the city on developing it either as part of the hub or as a standalone.

Councillor Connie Nykyforak  expressed concerns about having it be part of the design without a business plan, but the majority of council don’t want to lose the opportunity of private investment.

A motion was then put forth to include a pickle ball facility in the multi-use hub design plans.

Costs, shared expenses, governance and other issues will be dealt with as the project moves forward.