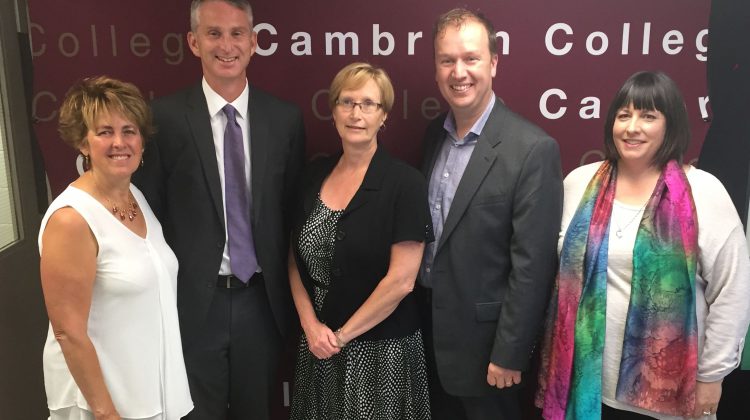 Photo: Sudbury MP Paul Lefebvre was in Espanola on Tuesday, September 12th to hand over a cheque for $358,330 for the Youth Entreprenurships Skill Development Program. The program is being offered in both of Cambrian College’s satellite campuses: Espanola and Little Current. On hand for the presentation (l-r): Algoma-Manitoulin-Kapuskasing MP, Carol Hughes; Cambrian College President, Bill Best; Interim Director of Business Development for Cambrian College, Sue Ferguson, who welcomed the visitors to the Espanola campus; Sudbury MP Paul Lebefvre and Program Facilitator Celina Mantler.

Cambrian College’s Espanola’ campus was the host site for a federal MP who had a sizable cheque in hand for a new program.

The funds will be shared between the college’s Espanola and Little Current campuses as part of the Youth Entrepreneurships Skills Development Program.

The funding was received by College President Bill Best, who thanked Lefebvre for helping make such a difference in people’s lives.

Up to 15 youth will be taking part at both locations.

Program Facilitator Celina Mantler (MANT-LUR) says the students will develop a business plan and will also meet with local community entrepreneurs during the course to bring their own business ideas to fruition.

Algoma-Manitoulin-Kapuskasing MP Carol Hughes was also in attendance to extend congratulations and the importance of investing in youth educational initiatives.